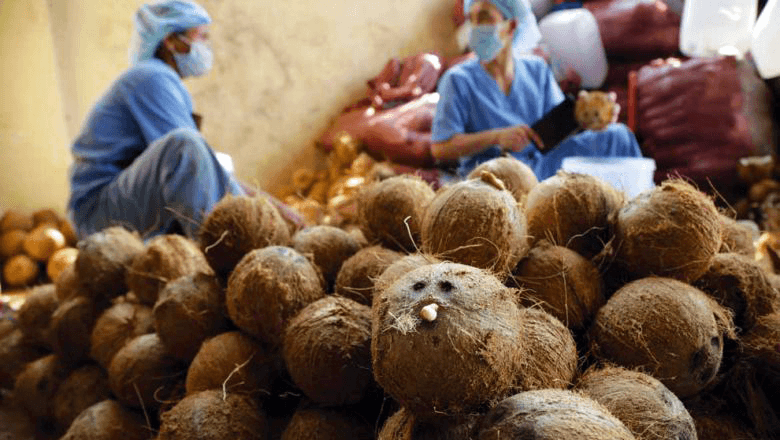 Virgin Coconut Oil: A young, potentially lucrative market for Cambodia to tap into

To get locally produced organic products in the Kingdom is no easy feat, as there is no industry regulation for the criteria needed to certify a product as organic. Nevertheless, the closest one can get to consuming organic products in Cambodia is to buy natural, or 100 per cent chemical-free, produce. One such brand that has stepped up to this demand, and in the process also created awareness about a little-known market, is Coco Khmer – a two-year old initiative that primarily produces virgin coconut oil.

“We started out with just virgin coconut oil, then we expanded into balms, and then the scrubs,” Robert Esposito, founder of Coco Khmer, says. Although it has no standalone store, as Esposito focuses more on production and supply, Coco Khmer products are stocked in over 10 boutique stores in Phnom Penh, Siem Reap, and Kampot.

Esposito, who previously worked in film and television in Canada until he quit his job in 2007, went on a whirlwind tour of eco communities and organic farms, searching for a niche product that could be harvested on a domestic level.

Fast forward six years from the time he first started researching coconuts, Esposito began to realise its huge potential for the Kingdom.

Coco Khmer gets most of their stock domestically. Hong Menea

Coco Khmer was born in July 2013, and in one month it had already started production. Its two facilities are within walking distance from each other, both situated in the Boeung Kak Lake area. Not only was the idea spawned by carving out a new market, but, according to Esposito, it was also a collaboration with an NGO friend who was trying to help underprivileged women and marginalised Boeung Kak Lake residents find sustainable employment outside of the traditional garment industry.

“[We] wanted something that people could do inside their homes, and this process here that you see can be done at home, so I proposed this,” Esposito says, pointing to his team of workers decked in blue scrubs and hair nets at respective work stations cutting, grating, and squeezing milk out from a mountain of coconuts.

According to him, about 4,000 mature coconuts are delivered to their facilities each week, primarily coming from the domestic market and especially Kampot. However, with seasonal changes, the local supply does not always meet demand and the company is forced to import from Vietnamese suppliers, he says.

While domestic sales take priority, Coco Khmer products have also circled the globe and are stocked in small quantities in Switzerland, Slovakia, Australia, Canada, US and Austria.

And while global distribution is welcomed, Esposito stresses the niche market organic mentality, saying: “Those who want to distribute in their respective countries can go ahead, I’m happy to be the supplier and build relationships with them. Who I sell to are normally people who are like-minded and share my beliefs. I don’t want our products to be misrepresented.”

Profitability of such a niche market

According to Esposito, there are currently no standards for virgin coconut oil production in Cambodia, and consumers are uncertain what quality to expect due to its overall obscurity, which accounts for only two per cent of the edible oil industry globally.

Nevertheless, while still in its infancy, virgin coconut oil has gone from rural food source, to obscure health food, to global craze in just a few short years; a craze that Esposito expects to continue as scientific backing of its health benefits has mounted – a key to sustainable demand in the future that allows for growth and competition.

But in capitalising on this organic trend, education and marketing is key as more consumers are exposed to better quality oil and learn about the different production methods, leading to a higher valued product, he believes.

However, with moderate margins and the urge to help marginalised residents, strictly producing virgin coconut oil is not enough and that is why the company has branched out into a myriad of coconut-based products.

“By developing downstream revenues, and making our by-products into high-value coconut based products, we can start to develop a niche market with unlimited earning potential,” he says.

Most of the Asian coconut-growing countries like Vietnam, the Philippines, and Thailand, are facing a crisis of ageing coconut palms, Esposito explains. While the life span of a palm is upwards of 100 years, they reach maturity in around 60 years, which means nut yields begin to diminish. Additionally, thousands of hectares of coconut palms have been lost to deforestation for development and various other cash crops. Not much has been done to reverse this trend, and most countries have less land for re-growth, while remaining land is more expensive.

On the contrary, Cambodia has a lot of affordable land for plantations. There are also a plethora of small sharehold farmers – with numerous coconut palms on their land – with personal plantations being used to fill the gap in their other yields. Even though there are no major plantations in Cambodia, seedlings planted today can start yielding nuts in as little as three years and will continue to flourish for the next 60 to 70 years, according to Esposito.

This leads Esposito to believe that Cambodia can enter the market with a strong position, catch up to its partners very quickly, and eventually outstrip the yield of neighbouring countries.

With proper investment in modern, integrated, coconut- processing factories and technology, along with proper plantation management and the strong support of small sharehold farmers, Cambodia could become a significant market player in virgin coconut oil and other coconut products, thus contributing to Cambodia’s GDP as a whole.